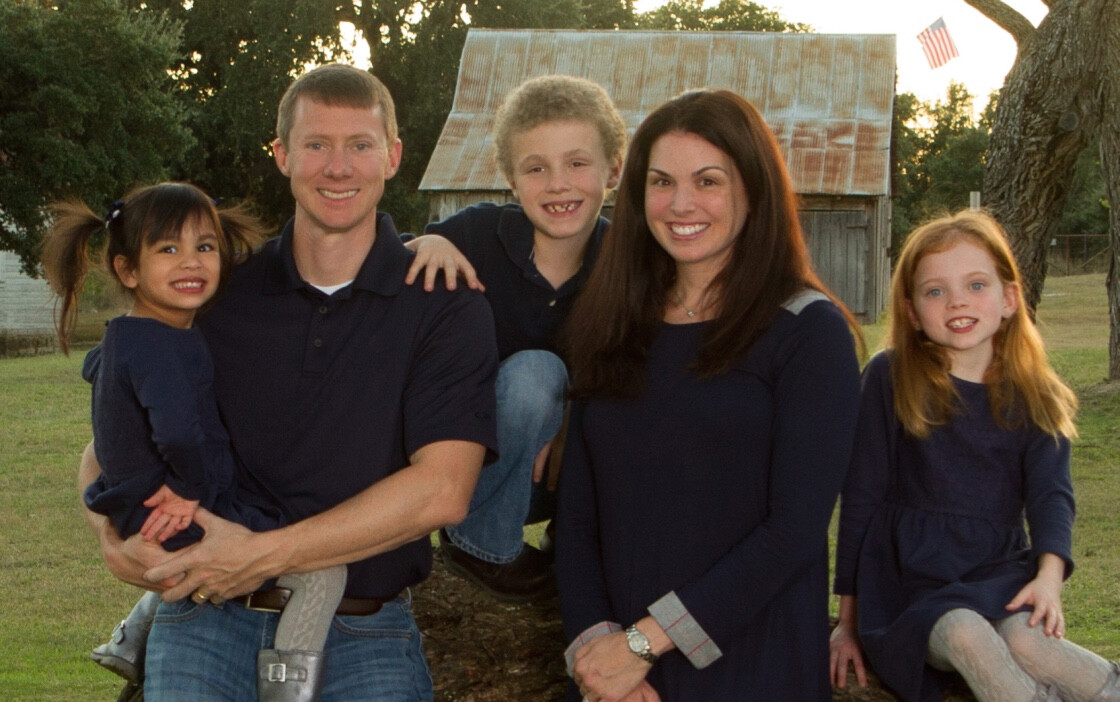 Nobody wants to talk about pregnancy and infant loss. At least that has been the predominate experience for Lauren VandeBerg in her journey with this kind of profound hurt. Lauren and her husband James have said goodbye to five babies in 10 years’ time; the loss is almost unfathomable. And yet, they have three healthy, happy children to tuck in bed each night and rouse each morning, and so the only choice has been to keep moving forward. They know, though, that this daily living through immense pain will catch up with you sooner or later, and as Lauren says, “you can cope with it in a healthy way or an unhealthy way. I chose unhealthy for a while. I want to help others choose better.”

Lauren and James’ story is long and twisty and difficult to hear, much less live. After several years of unsuccessful fertility treatments, they sought domestic adoption and brought their son, Clayton, home a few short months later. After hearing about a doctor in their area having much success with fertility treatments, they decided to give it one more try. To their great joy, they became pregnant with twins and all was well until the 13-week ultrasound when one of the babies was found to be without fluid in the amniotic sack. Lauren was determined to try to carry both babies as long as she could, even with doctors telling her that Faith, the twin without amniotic fluid, would not have properly developed lungs and could not survive. She carried them until, at 28 weeks, she developed a raging infection and an emergency C-section revealed exactly what the doctors had been telling them: Suzanne was tiny but as healthy as a preemie could be at 28 weeks. Faith had the lungs of a 13 week old and lived for 59 minutes while Lauren fought for her own life amidst the threatening infection, emergency C-section and debilitating grief.

For Lauren this was impossible.

If infant loss is a taboo subject, then talking about the loss of a twin is even harder. After all, folks expect the parents to be happy and focused on the surviving twin and ignore that they had a child die. For Lauren this was impossible. She experienced severe post-partum depression coupled with incredible grief. And on the heels of this loss, they moved to San Antonio from St. Louis, adding the difficulty of being in an unfamiliar place with unfamiliar people to the list of adversities to overcome.

Three years later Lauren found herself unexpectedly expecting without any medical intervention at all. They were thrilled, and the pregnancy was going well. At the 20 week ultrasound, however, there was suddenly no heartbeat. Lauren delivered their daughter, Grace, stillborn the next day, and it was later discovered that Trisomy 18, a genetic disorder that is incompatible with life, was the cause of the loss. Prepared for the crippling depression this time, Lauren started taking her prescribed anti-depressant the day after the delivery. Five weeks later, though, she woke up with acute anxiety, and medications were not helping. Desperate for a way to curb her anxiety, Lauren began drinking in the evenings regularly.

In the course of the next few years, they lost three more babies in utero around the 13-14 week mark, rendering incredible grief. They also adopted another baby, Charlotte, into their family, bringing incredible joy.

Just after the last lost pregnancy, Lauren’s mother was diagnosed with terminal breast cancer, requiring round the clock care. Lauren’s anxiety reached its peak during this time. She dealt with her grief, stress and anxiety with alcohol. After encouragement from others, Lauren checked herself into a treatment center three weeks after her mother passed away and has been sober now for three years.

At the time, it seemed easier to avoid the pain than to deal with something so incredibly uncomfortable and painful for others.

Lauren longed for years to have someone to talk to who understood her heartache, had experienced the same kind of unique loss that she felt. But there was no support group to be found, and she had no friends that could relate. Instead, even those that loved her wanted her to just be okay: “I don't think people know what to do when others are grieving.  Our culture just doesn’t teach us how to deal with loss.   We don't want to hear that there are things that can't be fixed, and that sometimes things happen, causing pain that will never fully go away.  At the time, it seemed easier to avoid the pain than to deal with something so incredibly uncomfortable and painful for others.  I have learned that what grieving people need is acknowledgement of their grief, support and understanding that some things cannot be fixed; they can only be carried,” she explains.

With a great desire to help others find a better way to cope with the sorrow of pregnancy and infant loss, Lauren went in search of some kind of support organization that might be doing the work of coming alongside these parents. She found a 41-year old national organization called Share Pregnancy and Infant Loss Support, whose resources, pamphlets, and memorial events were available for local chapters to use. Determined to make this support group a reality for San Antonio families, Lauren went by herself to the three-day training in St. Charles, MO. She came home knowing she needed to find a co-leader since Share doesn’t allow a chapter to open without two leaders. Within 24 hours of getting home, she was sitting at her daughter’s gymnastics class, chatting with the mom next to her about her trip. Intrigued, the mom continued to ask questions, explaining that she was a post-partum nurse at a local hospital. They exchanged numbers, and the next day Andrea Reidel offered to co-lead a San Antonio Area Share Pregnancy and Infant Loss Support with Lauren. Due to Andrea’s own experience with miscarriage and her professional experience, she has much to offer these families.

The next obstacle was finding a place that they could meet. Originally founded by hospital personnel, Share is not affiliated with any church or religion. For Lauren, this was very important: “Pregnancy and infant loss doesn’t discriminate. It happens to all people—those who have faith and those that don’t. I didn’t want there to be any barrier to people finding the support that they need.” For this reason, many churches would not give them space to meet. But when Lauren met with Pastor Holly Wilson, she received a different kind of response. Wholly aware of the need for this kind of group in our area, Holly was thrilled to work with Lauren and Andrea to make it a reality.

Share began meeting in July and have met the second Monday of each month since. What began as small group has already outgrown the original room they were in. Each month, newly grieving parents join this group with the hope of finding support in the midst of tragedy. In addition to the monthly meetings, Lauren and Andrea organized a candlelight service just before Christmas, and Pastor Holly led these families in remembering their lost babies. They are planning upcoming memorial events as well.

"Now I’m able to see clearly that God has put many people in my family’s life to point me to Him."

When I asked Lauren how her faith had survived so much heartbreak, her response was refreshingly honest, “I’ve questioned my faith. I didn’t talk to God for a long time. Now I’m able to see clearly that God has put many people in my family’s life to point me to Him. God is using Share to remind me that He hasn’t left.”