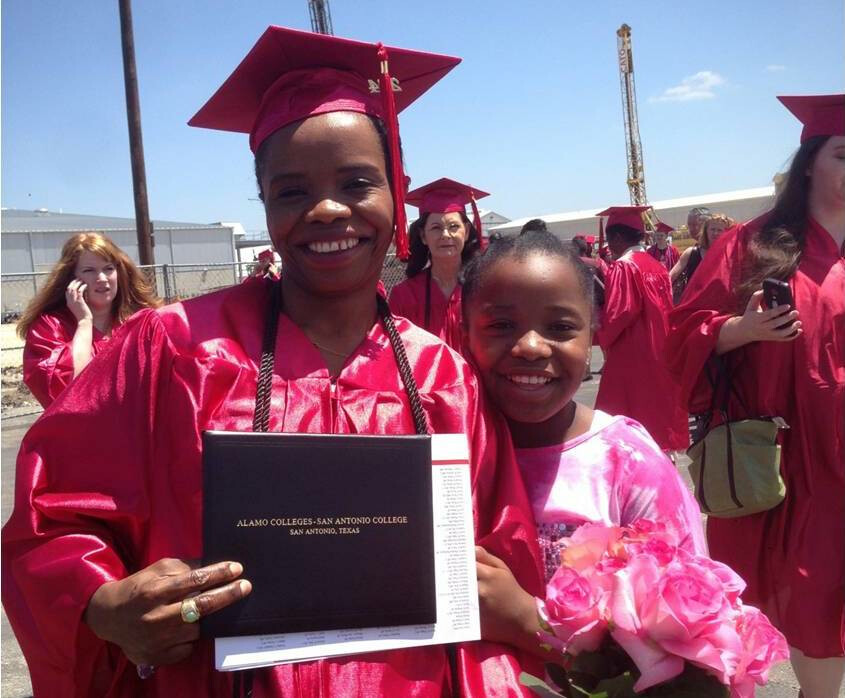 Denise Barker was sitting in a chapel service at Austin Seminary when she heard a distinct instruction from the Lord: “I want you to open a women’s shelter.” Denise will tell you that this was a unique moment in her life, that while she regularly spends time in prayer and listens for His promptings, to hear such a direct communication has not been an everyday experience for her. God had her attention.

As a seminary student, Denise could readily seek experience and training, so she looked for opportunities to learn more about serving and ministering to women. The school connected her to a nun with the Sisters of Charity of the Incarnate Word in San Antonio, who founded and ran the Visitation House, a place where homeless mothers with young children are empowered through housing, education, employment and a caring community, as they become self-sufficient members of society. Denise saw first hand the difference made in the lives of women through this kind of holistic intervention.

“We should open a women’s shelter,” Denise knew that the voice she heard in chapel years before was still calling her to action.

After seminary, Denise began serving as a pastor in her home congregation, University United Methodist Church. As such, she led both the Women’s Ministry and the Outreach ministry, and through the conversations and Bible studies and meetings, a thread began to develop: What could we do for women in San Antonio? What if we opened a women’s shelter? When long-time member and saint of University, Martha Etter, told Denise, “We should open a women’s shelter,” Denise knew that the voice she heard in chapel years before was still calling her to action.

Not really knowing where to begin, Denise called a meeting to create a task force to investigate the possibility of University’s opening a shelter for women and children. She didn’t know what to expect, but in her wildest dreams Denise did not anticipate the standing-room-only gathering of folks who wanted to be a part of this endeavor. So many talented, Jesus-loving folks gathered that day, and from there they split up into smaller groups, each tackling a piece of the puzzle toward a home for women.

To hear this story 11 years after the doors of Magdalena House opened, eleven years after the first mother and her son made this vision that began in a pew a real live place of “Home. Help. Hope,” is to understand that the Spirit of God works and moves among a group of hearers bent toward His voice. From the task force came logistics of where and how, and as Denise worked in the South Texas community toward social justice, the “who” became clear as well. In 2007, the first cases of human trafficking were making headlines and the Alamo Area Coalition Against Trafficking was formed. Magdalena House opened as a transitional home for victims of this terrible crime.

Eventually, Mag House broadened its scope to serve mothers and children who have fled dangerous and abusive lives of many kinds by providing transformation through education, nurturing community and programming for both mother and child, focusing on physical, mental, emotional and spiritual wellness. With transformation grounded in the biblical idea of covenant, each mother and her children are welcome to live at Magdalena House with all of their needs met as long as she is moving toward the educational goals set forth in her covenant. To date, Magdalena House has served 31 mothers with 45 children.

Not long after opening, Denise and the Advisory Board that grew out of the task force realized that the need for this kind of transformational home was great. Each week, Denise was fielding calls, turning away mothers and their children because there simply was not room for more. After two years of being supported under the umbrella of University United Methodist Church, Magdalena House became its own 501c3 non-profit, gaining an official Board of Directors, and under the leadership of new Board President and University member, Dr. Kay Rodgers, followed shortly by Greg Stroud, Mag House’s sphere of influence grew.

Over the next several years, directors from Catholic, Episcopal, Presbyterian and other Methodist churches were added, and these devoted folks brought with them ties to their congregations, and the people of God who were praying for and contributing to the good work happening at Mag House grew.

Denise and Greg knew that the future success of Magdalena House would depend on both the dedication of University and the involvement of new people, ideas and communities of faith. Over the next several years, directors from Catholic, Episcopal, Presbyterian and other Methodist churches were added, and these devoted folks brought with them ties to their congregations, and the people of God who were praying for and contributing to the good work happening at Mag House grew. Many dollars and many hours of service are needed to make Magdalena House possible, and Mag House needed to grow in order to meet the needs of San Antonio and South Texas.

I know that God’s vision is always larger than mine and begins with a single word or person which is fulfilled when the whole people of God respond.

This spring the dream to make more room for mothers and their children fleeing dangerous lives became a reality. In February of 2018, two new homes and a Family Wellness Center were added to the five-acre neighborhood and original home, tripling Mag House’s capacity to make a difference in our world. Denise says, “I’ve never forgotten a dream I once had where I was searching for a treasure chest and when I opened it, there was a single mustard seed sitting on a velvet cushion. I know that God’s vision is always larger than mine and begins with a single word or person which is fulfilled when the whole people of God respond. When our hearts are broken by what breaks God’s heart and we respond as the Body of Christ, anything is possible.”

To learn more about Magdalena House visit MagHouse.Org, and save the dates, May 17, for our House Blessing and September 29, for An Evening of Hope, the gala that funds more than half of the operating costs for Magdalena House each year.