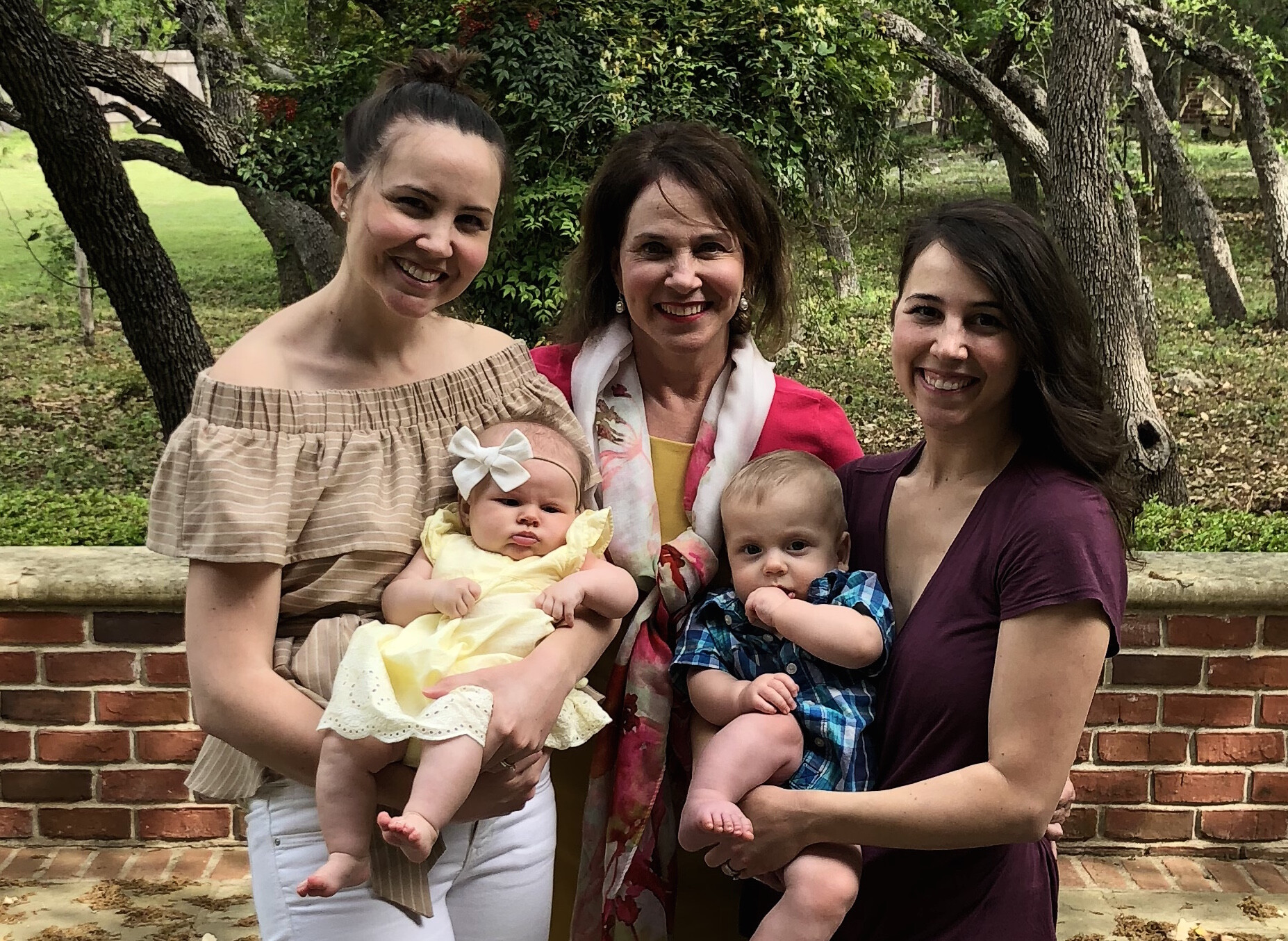 For years Laurie McCord sat in her beloved Covenant Bible Study class on Wednesday mornings and felt guilt—not because of some deep sin or secret—rather she felt guilty because she had not ever experienced the kind of pain or tragedy that her sisters in Christ were enduring. She heard them request prayer for incredibly difficult situations, and she wondered why her life seemed so full of blessing when her friends were suffering so. For years, she poured love and strength and prayer into her Bible study sisters, wishing she could somehow ease their pain in a more tangible way.

Almost five years ago, Laurie received a phone call that would change everything. Her husband, Mike, was calling from the medical mission trip to Guatemala that he had led for years. From a hospital in Guatemala City, Mike explained that the chest pain he had felt that sent him to the hospital was not his heart (good news!) but instead gallstones (bad news!); moreover, the surgeon had decided that a non-invasive procedure could be used to retrieve the gallstones (good news!) until that procedure still left one gallstone in place and the doctor needed to do surgery to finish the job (bad news!). Although Mike assured her that all would be fine, something told Laurie she needed to get on a plane and fly south. She was visiting family in Missouri while Mike was out of town, and so getting home to grab her passport and find a flight to Guatemala became a family affair. With the help of her two daughters, she was on a plane out of Austin, passport in hand, the next day.

With broken Spanish, Laurie pleaded for a doctor to come help.

With the help of a kind airport employee and a protective taxi driver, Laurie made her way to Mike’s side at the hospital in Guatemala. By the time she arrived, all of the gallstones were out, and the surgeon was so pleased with Mike’s progress that he thought Mike might be released the next day. Feeling much better after hearing the doctor’s report, Laurie stepped away to find coffee, and upon returning decided to enlist the help of the nurse to give Mike a bed bath. As she was gently washing his arm, he complained of feeling cold. A few minutes later, he said he felt ‘wheezy,’ and Laurie knew something was wrong. With broken Spanish, Laurie pleaded for a doctor to come help. Mike was struggling to breathe and stay lucid. As they wheeled him toward the ICU, Laurie remembers saying, “Stay with me, Mike. Please stay with me.”

On mission in a country far away from home, Mike was called to his eternal home, and Laurie was left in a hospital room, shocked and afraid.

But Mike couldn’t stay with her. Despite the medication and preventions against such in place, a pulmonary embolism took Mike’s life in a matter of minutes. On mission in a country far away from home, Mike was called to his eternal home, and Laurie was left in a hospital room, shocked and afraid. There is no preparing for the death of a loved one, but these circumstances seemed especially cruel. And yet, Laurie wasn’t alone. A Christian Guatemalan doctor who knew Mike from his many missions there just happened to arrive at the hospital at that time, and he sat with Laurie, his presence a witness to the greater Presence that remained. Another long-time friend from years on mission in Guatemala, Susan Graybill, invited Laurie to stay with her for the time until she could take Mike’s body home. While at Susan’s house just outside the city, Laurie began the very long process of moving from shock to grief. Susan fielded phone calls so that Laurie could just be, and it’s during this time that the first of many scripture would become a life-saving signpost: “Be still, and know that I am God; I will be exalted among the nations, I will be exalted in the earth.” The first important realization of Mike’s life and death slowly made its way into her bones: Mike had died in the country that he had such a passion for serving. And she was able to be still in that knowledge, not that it made his death easier, not that grief didn’t swallow her whole. Only that she could sit and “be” in the knowledge that God is God in Guatemala, too.

For his service to the country he loved, Mike was given the highest honor awarded to a civilian in Guatemala and received a military escort to the airplane. And from the moment she touched down in San Antonio, Laurie says she was surrounded by the love of family and friends. With great conviction that she was supposed to speak to the life Mike had lived so well, Laurie spoke at Mike’s funeral, and she says she felt God with her through the preparation and the day.

And then the grief came in full measure. Her precious daughters, Becky and Sarah, as well as their husbands Barrett and Clint, were continual sources of comfort and presence.  Dear friends from Covenant Bible study along with other faithful friends poured into her life with their love and strength and prayers, helping her understand just how tangible these were to someone who was hurting so deeply.

"There were still moments of joy even in the mire of sadness. The Holy Spirit was with me through the hard loss.”

In the great mix of emotions, there was the constancy of the Holy Spirit: “Even in the midst of sorrow there is security in God’s love, in the relationship that ties me to this life and the next. There were still moments of joy even in the mire of sadness. The Holy Spirit was with me through the hard loss.”

Laurie says she felt the Spirit speak to her often through song. At the funeral, “It is Well with My Soul” took on meaning beyond what she had ever understood before. Danny Gokey’s “Tell Your Heart to Beat Again,” Ray Boltz’ “The Anchor Holds,” and Mandisa’s “Stronger” have all played an important role in Laurie’s working through grief. And the Holy Spirit used scripture to speak to Laurie. Philippians 4:4 and Nehemiah 8:10 spoke much needed truth into her life, giving her purpose in the very breath she took. After all, she still had breath, and even in the difficult moments, that was praiseworthy. Nehemiah’s words reminded her that there were still things to enjoy, people to help, a difference to make.

And so about a year into her grief, she told her daughters that she was ready to truly deal with the entity of grief in her life. She was ready to lessen its hold on her. With the help of a grief counselor, Laurie has moved through the grief to a place where its presence is no longer a constant companion.

Last month Laurie and her three sisters lost their mother, again unexpectedly. She might have been 88, but she was full of life and energy, and the procedure she was having rarely causes the aspiration that took her life. And yet, Laurie sat before me clear-eyed, without the haze of profound grief that often accompanies recent, particularly unexpected, loss. Incredibly aware now that life has no do-overs, Laurie is not going to miss a moment. Her daughters have each given her a grandbaby in the last six months, and Becky’s son Luke and Sarah’s daughter Bryn have provided Laurie amazing reasons to cherish every moment.

"My relationship with Jesus gives me the security to experience life and not be afraid.”

Laurie says she has a new appreciation for Jesus’ words in John 14:27: “Peace I leave with you; my peace I give you. I do not give to you as the world gives. Do not let your hearts be troubled and do not be afraid.” She says, “Even in spite of troubles, the Holy Spirit has allowed me to be joyful. Mike was a wonderful man, husband and father. My mother left us all a legacy of love. These are things to be remembered and celebrated. My relationship with Jesus gives me the security to experience life and not be afraid.”